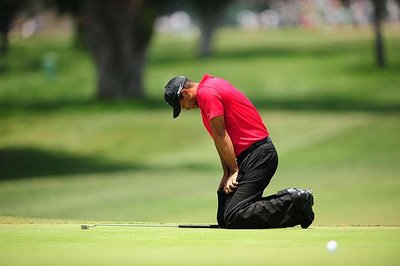 Professional ball stroker, Eldrick Tont Woods, who goes by the alias “Tiger” broke down in  tears and heaving sobs yesterday afternoon when the Greenius sat down with him for an exclusive interview.  In order to secure the chat I had to agree not to feature any current photos of him or talk about how puffy and scratched up his face was.

The first thing he wanted me to know is that his recent car accident had nothing to do with marital strife or his inability to be satisfied with just one supermodel.

“I was trying to commit suicide!” he blurted out when I asked him point blank the question mindless sheep everywhere had, “WTF?”

“I’m just so ashamed of myself,” he said.  “And the embarrassment I’ve brought to my family,” he blubbered. “I don’t deserve to live!”

“I’ve used my fame to push crappy, highly polluting Buicks and Cadillacs and I was getting ready to use it once again to help Chevron greenwash some more.  Chevron!  I knew they were totally bad, but they pay me so much damn money, I read your blog, I know they’re the top greenhouse gas emitter, but I just looked the other way,” Edrick the Tiger told me.

“I don’t deserve to live and that’s why I drove headfirst into that fire hydrant.  I just wasn’t going fast enough, I guess.  I am SO stupid!” he lisped through his now crooked teeth and busted lip.  The confessions tumbled out of him uncontrollably.

“I have two kids now, but all of the hundreds of millions of dollars I have won’t save my kids from the global warming fate all the world’s children now face.  And I’ve done nothing but make the climate change crisis worse through my actions, through my words and through all the commercials I make for disposable razors and other unsustainable crap that nobody really needs.  Hell, my carbon footprint is one of the worst on the planet.  Do you know how many homes and cars I have!?  Do you know how much traveling I do just going to strip clubs alone!?”

Your Greenius just sat there trying to think of something positive to say.  But I couldn’t, until finally it came to me.

“Well…” I said, “at least you still have that green jacket.”