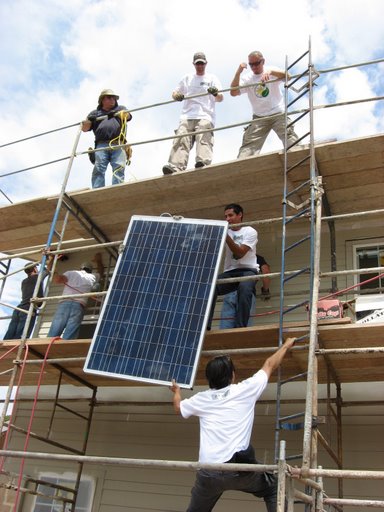 In a deal brokered by the city’s newly commissioned Citizens Environmental Task Force, Exxon/Mobil, owners of the Exxon/Mobil Refinery in the City of Torrance agreed today to fund a bond that will make low cost financing of solar energy systems for home and apartment owners.  The loans for solar power, authorized under California’s AB 811, are added as assessments to a homeowner’s property tax bills and are passed on to the new owner if a home is sold.

Without Exxon Mobil’s funding of the financing bonds the program would not have had the money to offer loans in Torrance.  The city had no money in the budget to make the program possible and no plans to find any in the midst of the on-going economic crisis.  But Exxon/Mobil had no such money problems.  “We’ve had one record profit quarter after another,” said a spokesperson for the oil company.

“We are so cash rich at the moment that we’re spending money all over the place while everyone else is forced to cut back.  We know carbon taxes are coming and we won’t always be floating in a sea of profits we made at your expense.  So it seemed only logical that we give a little back to a community we’ve released an awful lot of carbon in.  Hell, that entire property our refinery’s on will probably be a superfund site after they force us to stop producing our fossil fuels.“

Sounds like a dream too good to be true, doesn’t it?  That’s why they call me the Creative Greenius.

I mean really, a Torrance Environmental Citizens Task Force?  That’s so far from reality you’d have to be really creative to imagine such a thing wouldn’t you?

That’s because what’s good enough for Manhattan Beach and Hermosa Beach isn’t good enough for Torrance.  In Torrance we don’t want citizens telling politicians what to do or controlling how the industries that pollute in our own city act.  That’s too much democracy for Torrance where they’re not too interested in anything citizens have to say unless it’s praise for the powers that be.

But of course, it shouldn’t be.  Because if ever there was a time that Torrance needed the help if its citizens and the great resources that they possess, it’s right now.  It’s time for some big changes if we’re going to meet our city’s commitment to the Cool Cities program and if we’re going to help California meet our ambitious AB32 renewable energy and greenhouse gas emissions cutback goals.

Here’s my proposal for

To leverage the widespread “Yes We Can!” energy, spirit and skill sets of the Torrance populace by providing our city’s citizens and stakeholders with a hands-on opportunity to get informed, volunteer, serve and participate in making Torrance the greenest city in the South Bay.  We define “green” by the use of renewable energy, the reduction of greenhouse gas emissions, the savings of energy currently wasted, the most sustainable and conservation-minded water policies, and the most prudent and efficient use of recycling and waste management principles

To educate and motivate the public about the most accurate science facts and the best environmental practices, and to assist and partner with the City of Torrance and the South Bay Environmental Services Center to help the city meet state and county environmental standards/mandates in four key areas:

The task force will independently study and report on the city’s current environmental conditions and make recommendations for meeting the state’s green goals in all four areas, with a special emphasis on aiding compliance through the volunteer efforts of citizens.  The task force will engage in town hall style meetings and presentation to schools, homeowner’s associations, churches, fraternal organizations and established environmental organizations.

Why A Citizens Task Force Now?

With the state’s budget deep in deficit and substantial budget cuts slashing state, county and city programs across the board, the need for volunteer service by qualified citizens to help compensate for these deficits is critical.

Even more critical are the science-backed reasons for enlisting more citizen aid for the cause of reducing greenhouse gas emissions.  Our nation’s leading climate scientist, Dr. James Hansen testified before Congress in June of 2008:

“Today I testified to Congress about global warming, 20 years after my June 23, 1988 testimony, which alerted the public that global warming was underway. There are striking similarities between then and now, but one big difference.  Again a wide gap has developed between what is understood about global warming by the relevant scientific community and what is known by policymakers and the public. Now, as then, frank assessment of scientific data yields conclusions that are shocking to the body politic. Now, as then, I can assert that these conclusions have a certainty exceeding 99 percent.”

A perfect synergy now exists between the urgent needs and the desire of the California public to see immediate action taken and to participate in that action.
According to the July 2008 statewide survey released by the Public Policy Institute of California (PPIC):

In addition to the public support specifically for steps to support AB32 and combat global warming there is also an unprecedented willingness on the part of citizens to volunteer as inspired by President Barack Obama’s call for public service.

Through the use of free social media, voluntary contributions, private fundraising and grants the task force will require no funding from the city, state or county.  That will keep it independent and not beholden to politicians and bureaucrats for its financial needs.  Without that independence the Task Force would be as ineffective as the current Environmental commission is.

So what about Exxon/Mobil’s funding of the solar financing bond? 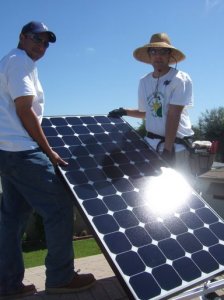 Now that Exxon/Mobil is no longer funding millions of dollars worth of propaganda that tries to deny man made climate change, maybe they can invest some of their extraordinary profits into helping to mitigate the damage their toxic product does here in Torrance and everywhere else around the world it is used.

Of course you’re not going to get that kind of creative approach to our city’s environmental problems from the status quo commissioners currently in charge of bringing bright environmental ideas to a city council that may or may not really be looking for any.

That’s why we’re no longer going to wait for them.