In a surprise to to all but the most savvy readers of this blog, Joe Galliani, the Creative Greenius, today fired the editors of The Daily Breeze newspaper and took over responsibility for all local environmental news coverage and analysis.

“I’d like to thank Phil Sanfield, Toni Sciacqua and Mike Carroll for the time they spent doing whatever it is they did with the paper – but I really can’t, not based on their truly lousy job performance.

They never worked very hard and they spent way too much time making personal phone calls and just goofing off.  I’ve been carrying them for far too long and it’s time for them to go now.  And when I say ‘now,’ I mean as in hours ago,” said Galliani who informed the three editors of their termination via e-mail.

The Breeze is no longer worth paying for.  It’s not even cheap at twenty five cents an issue.  So today I have canceled my subscription of many years.

I intend to read the Breeze’s few local articles of community interest for free on their highly unattractive website.  I advise the other dead-ender subscribers still left to cancel and read for free too.  You’ll be helping to cut your carbon footprint and you’ll be doing the South Bay community a good turn.

Sure, I feel bad for those local businesses who throw their money away advertising in the Breeze today, because their marketing budget is not only going to an ineffective legacy platform, it’s also supporting anti-American propaganda. The Greenius says those advertisers are funding a misleading manipulation of the news, one that covers up the deadly actions of the carbon-based industry interests the paper supports – at the expense of the health and well being of the citizens of the South Bay.  Shocking ain’t it?

And if you didn’t know that was true, it’s probably because your only source of news is the Breeze That No Longer Blows True (as native Americans call the paper).

While the Breeze deliberately ignores the biggest environmental news of our day, they offer instead the most lie-filled, disproved, already-rebutted by science, spam-quality propaganda claiming that global warming is a hoax and that global cooling is really the problem.  In the world of journalism that’s what’s technically known as “bullshit.”

Maybe you missed their headline yesterday that read:

Oh, that’s right, the Daily Breeze doesn’t print or report on stories like this.  They haven’t for a long time now.  They have a different agenda.  One that doesn’t pass the smell test.  Maybe you better click on the link I gave you in the headline to discover the truth.

Yesterday they published a piece by former ventriloquist’s dummy, George Will.  A piece so filled with lies and disinformation it was eviscerated by climate expert Joe Romm in his piece “Is George Will the Most Ignorant National Columinst?“

Unlike the pimp pieces printed in the Breeze, Joe Romm’s reporting is backed by fact after fact.  Facts that are linked to which you can read for yourself.  Facts like this from his blog Climate Progress:

The University of Illinois’ Arctic Climate Research Center — has become weary of having their data misreported by global warming deniers like Will. They just posted a reply on their website:

“In an opinion piece by George Will published on February 15, 2009 in the Washington Post, George Will states “According to the University of Illinois’ Arctic Climate Research Center, global sea ice levels now equal those of 1979.”

It is disturbing that the Washington Post would publish such information without first checking the facts.

With the body of evidence and facts available today, only the ignorant or the malevolent would attempt to mislead their readers so blatantly.  That’s why I had to terminate the Breeze editors.

It’s one thing for George Will to try and get away with this kind of crap – he’s been wrong about literally everything since the 1980s – but it’s far worse for the Washington Post and the Daily Breeze to allow it to go unanswered.  That’s just flat out lazy.  Hell, the Breeze is so sloth like, they never even carried the story that Will is telling lies about.  The irony drips on that one, don’t it?

At least the Washington Post balances these lies by reporting on the biggest climate change news of our day.  The Daily Breeze doesn’t choose to print those stories and you will never get the honest story on climate change by this failed paper with its pro carbon industry agenda. 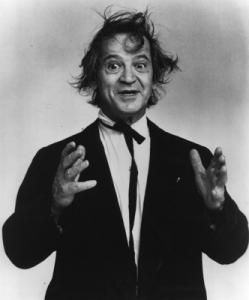 Yesterday it was George Will bullshitting us.

Last month it was the hysterical ravings of global warming denier Stan Katten.  The Breeze has always embraced the nuttiest fruitcakes in the South Bay and they don’t get any more Cuckoo for Coco Puff’s than SunSpot Stan.

If you hear Stan’s rants delivered with the same Professor Erwin Corey delivery that I associate Katten’s comedy with, they’re also hysterically funny.

Katten is associated with the far right wing Rand Corporation where he was apparently involved with receiving silent reception of messages from his home planet that only he could hear.  His comedy column has been appearing in Breeze for many years based on the secret files Stan apparently has on the Breeze publishers.

Stan writes that our climate change problems are all due to sun spots and flares and he’s a big fan of more CO2 in the atmosphere since as he wrote in the Breeze, “increases in atmospheric CO2 actually improve human existence by enhancing the process of photosynthesis...”

Stan also believes our entire world may just be a giant hologram.

Since I’ve never seen Stan’s Comedy Column in any other newspaper, I’m firing him with this termination too.   Sorry Stan, it’s nothing personal, I’m just plumb filled up in the lunatic category right now and we’ve got to let you go.  You were redundant in that way.

Speaking of redundant, 80% of the Daily Breeze content comes straight from the Associated Press nowadays so we can all just go to the AP website to read those articles, usually a full day before Phil, Toni and Michael put their edited versions of them in their little paper-ette.

I still believe in newspapers, I just don’t believe in a pretend newspaper that doesn’t live up to any real journalistic standard and offers no honest voice.  I have no faith in a business that doesn’t have the best interests of the community at heart.

So I’m taking over the responsibility for environmental news coverage in the South Bay and I’ll do the job that they cannot.  The truth is out there and I will bring it to you.  It’s not that hard a job.

And here’s one more bit of truth for today:  If you want to see just how UNgreen my former local newspaper is at its heart, pay a visit to the Breeze’s greenwashing blog typed up by the editorial page editor. Go ahead, click on the link.  This guy can use the traffic.

Instead of actually covering local environmental issues and offering any added value on them, his blog rehashes stories found elsewhere and offers nothing new about them.  Did I mention before that I fired this editor and the other two because I found them lazy?

Mr. Carroll types a few paragraphs on events he doesn’t attend and issues he doesn’t have any insight or expertise on.  It’s a novel, workfree approach.  The level of “green around the edges” he offers is praising the military for their great environmental record and promoting the use of “green coal.”  No one ever comments on his posts and his impact is the equivalent of a man talking to his own hand.

I’ve never seen Mike Carroll at any Green Task Force meeting, any South Bay Environmental Services Center function, or at any other significant environmental event or gathering in the South Bay for the last two years.  And believe me, I’d recognize a man as striking as the guy represented by the photo on his blog.  One doesn’t forget a face that memorable.

Based on his amazing, stealth cloaking capabilities perhaps he should call himself The Green Ghost.

Too bad for him I’m an honorary Ghostbuster and we ain’t afraid of no ghosts.

2 thoughts on “Failed Local Paper Put Out Of Its Misery – By Creative Greenius!”