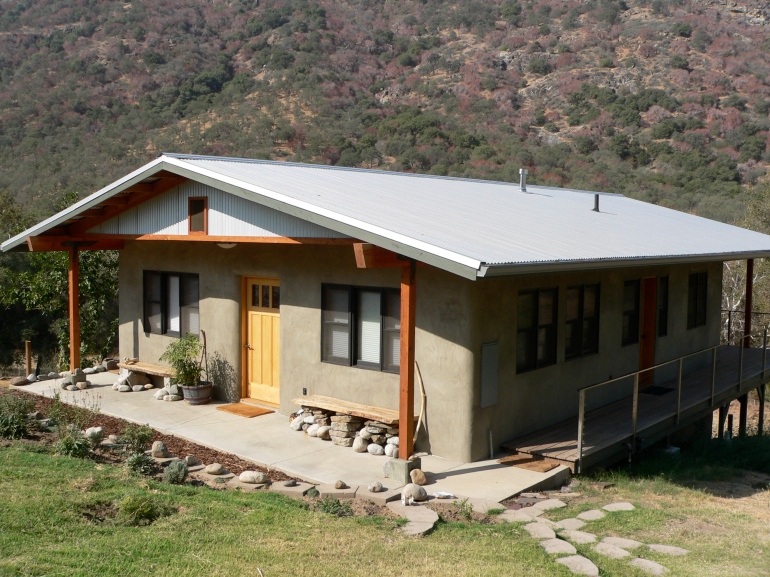 The Kaweah Cottage we’ve been staying in was designed to accommodate solar panels.  The Cottage is perfectly situated for unobstructed power generation and James Seligman, the owner and our host has everything – including the wiring – in place for a solar system – everything that is except the financing.  It’s not going to be cheap, but eventually he’ll get it done.  That’s just another thing James and I found we had in common.

I really enjoyed meeting James and getting to spend some time talking with him.  He’s a righteous dude, a fellow Mac user, filmmaker, peace lover and progressive environmentalist, just like your pal the Creative Greenius. 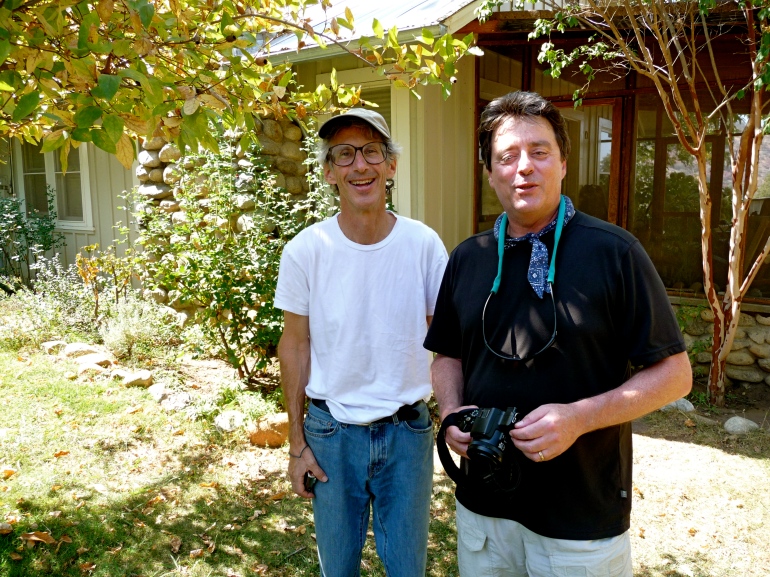 When I first told James that I had just last week received my third estimate for my own solar system, a smile lit up his face as he looked straight at me and said, “I’ll look forward to talking to you about that.”

We never did get a chance to have an in depth conversation about it, which is too bad because I went on an entire roller coaster ride of review and decision making while I was at the Cottage.

And I did spend plenty of time thinking about the subject, talking to Deb about it and mulling over the three quotes we had received.

After going through that whole process we came to the firm decision to go ahead and spend the $29,216 and have our system installed.  About 24 hours later we came to a entirely new decision.  The world is now spinning at warp speed economically and in the immortal words of Don Ameche in the film of the same name, “Things Change.”

First let’s take a step back and share a look at my three bids.  To make things easier to understand I’ll be using the real names of the companies I actually got my bids from.

I gave all three companies my electric usage information for the past four years and told each that I was looking to generate 100% of my electricity from my solar system.

All three of those bids above include the $8,000-$8,700 rebate from the state of California I’ll get.  All of the solar companies I’ve talked to will do the paperwork and file for the state rebate and will front (deduct) the rebate amount from the payment due to them.

They all like to include the $2,000 personal tax credit you get on your 2008 taxes from the IRS to show how your system costs two grand less, but you still have to pay that $2,000 to the solar company when you pay for your system.

Kevin, the nice dude who came out to do my site survey and prepare my quotes for Solar City told me that Solar City DOES deduct that $2,000 from the amount I’d pay them, but I’m pretty certain he got that wrong.  I gave him a chance to correct that mistake when I emailed him asking for a written confirmation that Solar City would deduct the cost of my tax credits from the amount I’d have to pay them for my system.  He replied with a one word e-mail: “Yes.”  Kevin is a man of few words but he’s a handsome young dude he is.

Yet I still think he’s wrong and I’m not going to hold him to that deal point.  Especially since just six months ago Kevin was working in the financial services industry for a brokerage house.  So I’m just going to chalk his mistake up to inexperience and over-eager salesmanship.  Plus there’s probably some kind of recovery period you go through after leaving a brokerage house.

I bet as Kevin continues working in the fast-growing solar industry he’ll get a handle on stuff like this.  Hey – a guy’s got to start somewhere – except that is, on my house.

So here on my new reality show, “Give Me The Power!” our new friends from Solar City have been voted off my roof first.  I didn’t feel too bad about it all because Kevin had already told me how successful and super expansive Solar City already is – so I’m sure they won’t miss my job one bit.

The other two bids I got came from much smaller companies who sent far more experienced people out to do my site survey and prepare my quote/proposal.  Me being the Creative Greenius, I enjoyed spending time on my roof with both Grant from EESolar and Peter from Absolutely Solar.  These guys each really knew their stuff and both came as referrals from people I trusted.

I thought I had the perfect unobstructed South-facing roof to hold the panels but Grant was first to break the bad news to me – which Peter and even Kevin confirmed when they each used their shade measuring devices – my neighbors house behind mine, on a street much higher than mine in my hilly neighborhood, shaded too much of my Winter and even some of my Summer sun.  It was no deal putting the panels on the South-facing roof.  I wasn’t going to be able to generate 100% of my electricity that way.

But my roof on the North side still can get the job done with the right racks at the right angle.  An angle estimated at between 5 degrees and 22 degrees in my three different estimates. 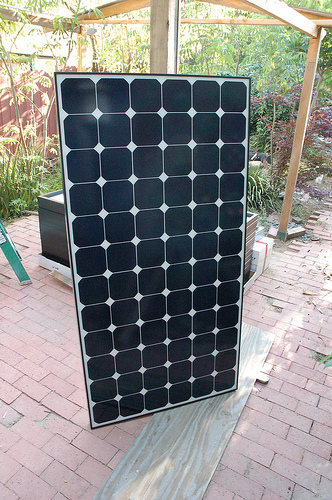 Peter from Absolutely Solar didn’t have anything good to say about the SunPower solar panels and told me he wouldn’t use them on my job.  I didn’t find any of his arguments persuasive and I still wanted Sunpower panels after he left.  But like I said, I enjoyed talking with him and the way he approached his survey tasks.

I really want to generate my own clean, green energy – more than anything else as a moral and ethical decision, but looking at it strictly from a financial standpoint solar makes no sense at all for us.  Our electric bill costs about $85 a month – that’s $1,020 a year.  At that rate it would take almost 30 years to pay off our new solar system.  Even if our electric rates double that’s still a 15 year payback.  Of course that’s not counting the $2,000 tax credit I’d get if I act before the end of the year – but I think you get the point.

The ONLY thing that makes it possible for me is the business I run from the separate studio building on my property where I’ve worked for the past 15 + years.  It accounts for 35% of my total square footage and will be paying for 35% of the system.  The tax credits and accelerated five year depreciation for the business investment add up to another $8400 in savings on top of the $2000 in personal tax credits.  That’s $10,400 I can deduct from EESolar’s $29,216 to get an $18,816 net price.

But man oh man that payback period is still a bitch… except maybe if you add appreciation to my home’s value (you know, when Real Estate stops dropping like a rock and reaches rock bottom) and in electric bill cost inflation and rate increases.  In a perfect world it would be about an 11 year payback period which would time out nicely with when my house will be paid off and I’ll be eligible for my Mr. Joe’s Really Big Productions pension plan payments.  Of course all of that may just be dust in the wind if the current economic meltdown spirals out of control.  And the chances of that happening with George W Bush at the helm are always high since he is without a doubt the undisputed Master of Disaster.

And the bigger “of course” is of course the current climate path we’re on which means we’ll all be really screwed beyond the point of no repair 11 years from now.  That’s almost a certainty now, but hey I’m still on vacation till I drive home later today so forget I even said that for another day.

But one thing is obvious to me now – with the scary talk coming out of Washington and Wall Street about the fate of my retirement investments and savings – this is wrong time to pull almost $30,000 in cash out of the bank to finance a solar system that will be saving me $85 a month in electric bills.

Once I get home I’m going to have to shift gears and look to finance my system through the newly passed California solar financing law, AB 811 which grants cities and counties in California the power to finance solar systems through low interest lows paid back as an added assessment on your property tax bill.  That would wind up costing around $2,000-$2500 a year. 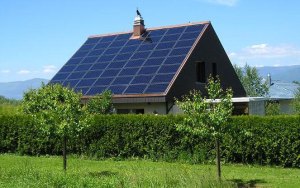 I’ve already talked to the folks in Torrance City government here and they were grateful that I brought the subject up because they were unaware that the new law was in place.  Needless to say they don’t have a program in place.  I’ll contact the county of Los Angeles through our County Supervisor, Don Knabe, a good guy whose staff has helped with local issues in the past.

Guess I’ll need to lobby for passage of AB 1920 as well – that’s the bill that will let solar system owners get paid by the electric company if they generate more power for the grid then they use.  Right now the best you can do is zero out your bill.  So there’s no real incentive for California homeowners or businesses to max out their potential with rooftop solar.  I think giving Californians a chance to make a buck from the sun hitting their roof will be all the inspiration a lot of people need to begin a new kind of gold rush here.

But meanwhile, my dream of getting my new solar system before the year is up is now officially over unless I can get some of that government financing in the next three months.

It’s going to really suck if Obama isn’t elected and we get no solar tax credits for next year, but that’s what will happen if McCain gets in.  As I’ve mentioned before he’s voted against renewable energy the last 8 times it has come up for a vote and he’s a “Drill Baby Drill” kind of guy.

3 thoughts on “The Greenius Reviews His Solar Bids”