THEM RIGS IS AS SAFE AS WALL STREET ITSELF, GOSH DARN IT

Among the blatant BS that passes for talking points by pro-carbon advocates for offshore drilling like HockeyPuck Palin herself, is that drilling today employs such modern, clean, safe technology that it’s not fair to say there’s any danger of spills like the one that ruined Santa Barbara’s beaches back in the day.

But what these truth-deprived oil-hungry energy experts don’t want you to think about is accidents that modern technology doesn’t mean jack squat to.  Damaging oil spills like the “accident” that happened in San Francisco Bay last year, or the one where the Captain of the Exxon Valdez crashed his tanker into the rocks up there in Russia’s next door neighbor – Alaska (and that was even before texting!)

Just last month we had another perfect example of just how safe from oil spills we all are here in the modern super-secure era we live in. 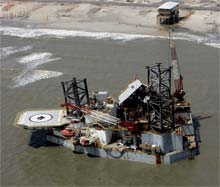 Hurricane Ike hit the Gulf of Mexico where we already have a whole bunch of those high-tech, no-spill, self-cleaning, Finding Nemo-friendly off shore oil rigs.  Guess what we learned today?

“WASHINGTON – Hurricane Ike’s winds and massive waves destroyed oil platforms, tossed storage tanks and punctured pipelines. Only now is the environmental damage becoming apparent: At least a half million gallons of crude oil spilled into the Gulf of Mexico and the marshes, bayous and bays of Louisiana and Texas, according to an analysis of federal data by The Associated Press.

In the days before and after the deadly storm, companies and residents reported at least 448 releases of oil, gasoline and dozens of other substances into the air and water and onto the ground in Louisiana and Texas. Hardest-hit were industrial centers near Houston and Port Arthur, Texas, as well as oil-production facilities off Louisiana’s coast, according to AP’s analysis.”

I bet you won’t hear Joe Six-Pack’s friend mention a word of this spill while she’s busy doing her maverick pitbull thing on Barack Obama’s reputation as an eight year old.

Hey, one last thought – Since oil is now only $89 and change a barrel does it still make as much economic sense to drill-drill-drill off shore as it did in June when oil was $140 a barrel?

Wasn’t it the skyrocketing price of oil and the $4.50 a gallon we were paying at the pump that freaked people out enough to think that drilling for oil we won’t see at the gas station for about ten years made any sense?  Wasn’t it just the desperation of people who were getting screwed at the pump by the oil industry that made them such fans of offshore drilling?

Isn’t THAT what really drove the call to “Drill baby drill!”

And whether it’s Democrats or Republicans calling for more offshore oil drilling, how can members of either party totally ignore the increases to greenhouse gasses and climate change all that off shore oil will generate?  As long as they’re talking about fantasies like “clean coal” then they’re part of the problem, not part of the solution.

The real question for candidates in this election is – How far past the point of no return will we need to get before THAT becomes any kind of priority in your action plan?

Your Creative Greenius says the current collapse of our economy will seem like merely the flea on a big rabid dog when the truth about what has happened to the climate in the last 12 months sinks in.  I’ll have more news on that for you in my next post.  Just don’t kill the messenger is all I’m saying…

In the meantime, like the song says, “Enjoy Yourself, It’s Later Than You Think.”

One thought on “Spill Baby, Spill!”