I just got the email below from author/activist/environmentalist, Bill McKibben of 350.org   He’s in Washington DC with thousands, protesting the coal-fired Capitol Power plant–a dirty symbol of our dirty energy history.  Bill’s helping to create the largest ever civil-disobedience on climate change in history.  It’s happening right now.

Along with Al Gore, Dr. James Hansen and Joe Romm, Bill Mckibben is one of the climate change activists I admire most.

Bill asked us all to be there, but for those of us who couldn’t, he’s asking for our help by signing onto a statement of support.  If you haven’t already done so, can you take just a few seconds out of your day to add your name by clicking on the 350 link?  I just signed it, added some scathing comments and now we all need to stand together on this one.

After the jump, Bill McKibben’s email –

To:  Joe Galliani, Creative Greenius
From: Bill McKibben, 350.org
Subject: Stand with me to take down dirty coal. 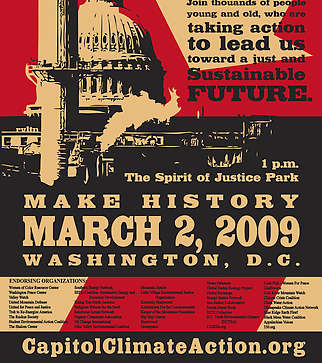 There are moments in a nation’s–and a planet’s–history when it may be necessary for some to break the law in order to bear witness to an evil, bring it to wider attention, and push for its correction.

Today is one of those days.

In a few hours, the first big protest of the Obama era — and the largest-ever civil disobedience against global warming in this country — will take place against the not-very-scenic backdrop of the coal-fired Capitol Hill Power Plant in Washington DC.

Myself and thousands of people of every stripe will be risking arrest today, and I’m asking you to stand with me as it unfolds.

Please stand behind the thousands gathering today in DC, and show the world that people everywhere are uniting behind a future free of coal–a future safe from the ravages of climate change.

Click here to stand in solidarity with this action:

Here’s the statement you’ll be signing onto:

I share your vision of a coal-free future, and stand in solidarity with the coalition of citizens united not only to get DC off of coal, but for a clean energy future and a safe-climate for the entire planet.

With President Obama and a new US Congress, there is more possibility for climate action than ever before. It really feels like the U.S. is close to a breakthrough–and this protest can help create the political space a breakthrough requires. 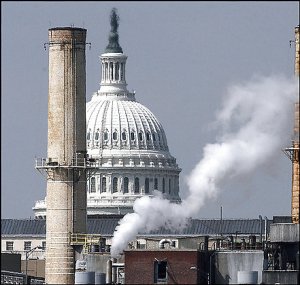 Here’s the backstory: Washington DC has seen its share of big protests over the years, and most of them center on the White House, the Mall or the Capitol.

But today’s event is just a few blocks a way from the White House at the the Capitol Power Plant–a dirty symbol of the dirtiest business on Earth, the combustion of coal.

In that one plant — owned and operated by our senators and representatives — you can see all the filth that comes with coal. There are the particulates it spews into the air and hence the lungs of those Washington residents who enjoy breathing. There are the profits it hands to the coal industry, which is literally willing to level mountains across West Virginia and Kentucky to increase its fat margins. And most of all there is the invisible carbon dioxide it spews each day into the atmosphere, drying our forests, melting our glaciers and acidifying our oceans.

The power plant is only a symbol, of course — a lunch counter or a bus station in the fight for environmental justice. We’ll sit down at its gates for a single afternoon, but the message is much larger: it’s time to start figuring out how to shut down every coal-fired plant on the planet. Success won’t come right away because we’re up against some of the world’s richest corporations, but we have to start turning this tanker around someday, and tomorrow is that day.

Again, our efforts will be greatly helped if you stand in solidarity with this action.

This may seem like an odd time to take to the streets — after all, the new administration has done more in a month to fight global warming than all the presidents of the past 20 years. But in fact, it’s the perfect moment. For one thing, our leaders may actually listen — in the anti-science years of the Bush administration, global warming activists concentrated their work on state capitols, knowing that the federal government would never budge. Now, if we demonstrate that there’s real public pressure, we may give the Democratic Congress and the White House some room to act.

More to the point, the time not to act is running out. Climate science has grown steadily darker in the past 18 months, ever since the rapid melt of Arctic sea ice in the summer of 2007 showed scientists that change was coming faster than they’d reckoned.

That message was underlined recently at the Washington meetings of the American Association for the Advancement of Science, when Stanford researcher Christopher Field said: “We are basically looking now at a future climate that’s beyond anything we’ve considered seriously in climate model simulations.” Our foremost climatologist, NASA’s James Hansen, has given that future a number — any level of carbon dioxide in the atmosphere beyond 350 parts per million, his team has demonstrated, is “incompatible with the planet on which civilization developed.”

Since we’re already past that number — the carbon dioxide level is at 387 parts per million — the fight is on. Indeed, by Hansen’s calculation, the world will need to be out of the coal-burning business by 2030, and the West much sooner than that, if we’re ever going to get back to 350. It’s no accident that NASA’s James Hansen announced he’ll be on hand to get arrested. So will Gus Speth, who ran the United Nations Development Programme, and the farmer and author Wendell Berry who has seen the devastation of his native Kentucky.

And maybe most heartening, I’ll be joined by over a thousand college students who will have just come from lobbying in the halls of Congress for clean energy. They’ll have just wrapped up PowerShift ’09–an climate convergence organized by a separate coalition that promises to be a historic catalyst in this movement. It’s a perfect healthy movement is like a healthy ecosystem–marked by spectacular diversity. There are many ways to be a climate activist–lobby, rally, or for me today, risking arrest with civil disobedience.

Getting the planet off coal — getting the planet back to 350 — will be the main political and economic challenge for the lifetimes of those college students. Those of us who are older won’t live long enough to see the final victory, but we can help get it started, by lobbying, by writing e-mails — and by sitting down in the street on an afternoon in March.

P.S. Please forward this message far and wide. If your friends and family share a vision for coal-free, clean energy future safe from climate change–and I’m quite sure at least some of them do–ask them to sign our solidarity statement by clicking here.

Your Greenius says that since the US House of Representatives last week wimped out and rolled over like dogs on their previous pledge to make it’s offices “carbon nuetral” we’re going to need to march, and protest and risk arrest by engaging in civil disobedience to get our washed-up leader/losers to do the right thing.  Because there’s one thing you can count on when it comes to taking the necessary climate change action by Congres – and that one thing is: NOTHING.

There isn’t a single Republican worth anything to the climate in the entire House of Representatives.  At least half the Democrats aren’t any better on this issue and they deserve to go to.  And when I say “go” I’m thinking that the proper send off for all these long term failures is to be tarred and feathered and ridden out of town on a rail.

One thought on “Frankly, I’d Rather Be Getting Arrested with Bill McKibben Today”