As I get ready this morning to head over to the Lutheran Church in Gardena to participate in this national day of service by helping to prepare meals for my less fortunate neighbors, I want to thank the auto industry for giving me a great laugh at their expense.  I about had my Trader Joe’s coffee shoot out of my nose as I read the quotes from losers and failures who speak for this brain dead business.  These clowns are freakin’ hysterical.

They were offering classic comedy takes in their ultra lame response to our tough California greenhouse gas emission laws that will now be going into effect here, and soon thereafter nationwide, once the new smart President takes office.  They remind me of a condemned prisoner complaining that the noose is too “itchy.”  Here pal, let me help scratch that for you…

According to the L.A. Bird Cage Liners article this morning:

Asking carmakers to comply with California’s rules would be tantamount to forcing a cancer patient to “finish chemo and then go run the Boston Marathon,” General Motors Corp. spokesman Greg Martin said. “Right now, we’re just trying to make it through the current situation.”

That’s priceless, Greg “I’m Not Funny Like Steve” Martin!  In fact I highly recommend that you and your fellow spokespeople for GM start getting that chemo today, because we want to see you in that Marathon with the IV drip at your side.  Since the products you make actually give people cancer and a reason to need chemo, your punchline has an extra bonus laugh attached.  Way to kill the audience, Greg.

And if you dig absurd and ludicrous comedy like I do, then the  sound of the auto industry’s plate spinners, lobby-horses like long time laughbag Charley “Truthless Bandito” Territo, will cause side-splitting, belly-aching, hard-dee-har-hars.  This bozo beats them all:

“We’re committed to increasing efficiency, but these kinds of increases take time and money, and unfortunately that’s something in very short supply right now,” said Charles Territo, spokesman for the Alliance of Automobile Manufacturers, a trade group that has led legal efforts to squelch the California rules. 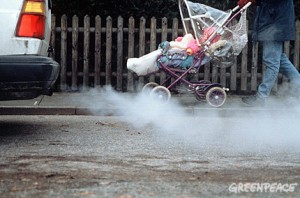 That’s a real bummer about your lack of money old Chucky, but I’m still laughing away at your karma, dude.  I hope you didn’t have all your retirement invested in the same car comedians you represent or maybe your future funding will be “exhausted!”  Get it Charles?  Don’t worry, pal, you soon will.

Even with CO2 levels well past the safe point of 350ppm and rising ever more dangerously, old school, baggy pants vaudevillian GM Vice Chairman Bob Lutz, known throughout the auto biz as “Rhymes with Nutz and Putz” says,

“We can meet the law, but it’s going to take a lot of money.”

By which GM’s head Putz means more money from you and me for a car company that will soon be going bankrupt and stiffing everyone they owe.  Now that’s funny!

Really Bob?  Even MORE money for GM?  How about if we give it to you in those big denomination Zimbabwe dollars?  Maybe some Washington Mutual stock instead?  I KNOW you don’t want it in that worthless GM stock you keep printing.

Maybe Bob the Putz should just stick to his “Global Warming is a Big Fat Hoax” routine which made him comedy famous all around the world.  He’ll say anything for a yuck and he’s not afraid to work blue.

But Bob isn’t the only car comedy club member.  And right now they’re all doing a group bit where they put on diapers and cry their eyes out over having to cut the death dealing emissions that their product produces everywhere it’s used.  They’d like to use you and me as their suckers, but we’re now busy putting them out of business instead.

So please pardon me while their unhappiness, confusion and anger brings me danceable joy, unabashed happiness and huge bombastic guffaws.

What a world class collection of whining, wailing, tantum-throwing, self-centered clueless babies they are.  They sold out our climate so they could line their pockets and they’ve still got their hands out of their limo windows.

“A nightmare scenario for automakers,” the Bird Cage Liner calls it.

“It’s about time,” says the Creative Greenius. “And shut that annoying kid up, will you?!”

Because they were so busy scamming people into buying planet-killing Hummers, Expeditions, Tahoes, Suburbans and other “the joke is on us” vehicles, they ran their own business into the ground.  They satisfied their greed at the expense of our environment and our health and the Creative Greenius says they are finally getting what they deserve – except for our government bailouts – and next week when President Obama takes office our California Emission rules are going to smack them down even harder, just as they should.  If you listen hard enough I’m sure you’ll be able to hear the “Boing-Boing-Boing!” noise it makes.

And your Creative Greenius says let’s really get tough and throw the auto company execs and their syncopates in blue collar prisons until they stop selling cars that spew greenhouse gas into our air.  It’s the moral equivalent of giving a bad comic the hook and there’s usually plenty of laughs in that too.

Just as the dimwitted and selfish Coyote gets his in every Roadrunner cartoon, so too should the kindred cartoon clowns of the car comedy business plummet from the cliff, anvil in hand.  Beep-Beep!

And I feel just as sorry for all the folks working in the internal engine-based car companies as I do for all them workers who once made the hats that every man in America wore to the ballgames and the inaugurations.

These auto workers knew what kind of products they were making and they knew what damage these products cause.

A lot of these weepy-eyed workers are the same ones who took sledge hammers to Japanese imports as Detroit’s clever response to high mileage, low maintenance cars for the people. I’ve visited Michigan dozens of times in the last 20 years and I never met a single US Auto worker who cared one whit about the greenhouse gases they’re responsible for.  All I ever heard them do was badmouth the small Honda car I drive and complain about CAFE fuel economy standards.

Guess what?  I’ve got a real funny way for them to use their big sledge hammers now.  It’s called “pounding sand.”  The National Park Service has got a great Sleeping Bear Sand Dunes up north in Michigan for them to get cracking on.

It’s time for people to stop complaining and start making products that don’t treat our atmosphere and our future as a joke.

And if that doesn’t tickle your funny bone, well then, you just don’t understand how comedy has changed today along with the rest of America.

One thought on “Comedy CAFE Clowns Crack Me Up”