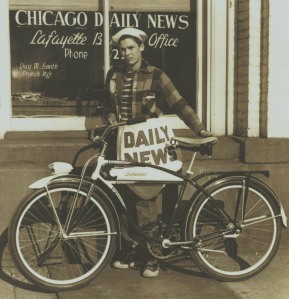 I’ve had a lifelong love affair with newspapers. I’ve been reading them every day since the 1960s and I’ve learned more from newspapers than I ever learned in school.

Growing up in Brooklyn, New York, I read the New York Daily News after my parents were done reading it.

When I was 12 and we were living in the bucolic burb of Westfield, New Jersey, I was a newspaper delivery boy on my bicycle whose customers all got their papers late because I had to first read the sports, the comics, the movie reviews and my favorite columnists in all the papers I delivered – the Newark Star Ledger, the NY Times, the NY Post, the NY Daily News and Newsday. 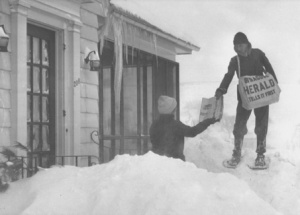 When we landed men on the moon, I was the kid who delivered those historic newspapers to my neighbors, but not before reading every article and devouring every black and white photo.  It’s my fault some of them found out a day late…

Years later, in 1983 after I was grown, married, and already living in California for a while, the New York Post ran my all time favorite tabloid headline.  It was sensational and it was coarse and shocking, but it was honest and it sure as hell didn’t bury the lead.  Who knew I’d get to use it again, today in Creative Greenius to make an analogy about the current state of the newspapers I once loved and depended on?  Gotta love them internets…

Today it saddens me on a deep personal level – not to mention chapping my hide – that as a decades long subscriber to the Los Angeles Times, the Wall Street Journal and my local Daily Breeze I am witnessing the newspaper industry literally evaporating away in my hands as I unfold the papers now delivered to my house – not by a boy on a bicycle, but by adults in a mini van in the dead of night. 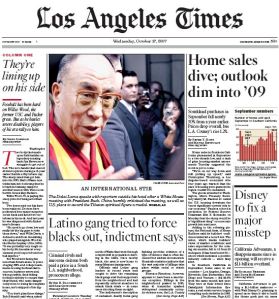 All three of the newspapers I used to relish reading to start my day are now like a dear friend with terminal cancer who you behold physically wasting away to the point where it gets painful to look.  But as a loyal and trusted friend you don’t turn away or stop inviting them over.  Instead you hold onto them until the bitter end, even while you’re already mourning their loss, until one day they simply are – no more. 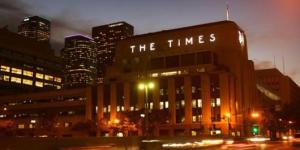 And if this departed friend is someone you also have relied on to fulfill an important role in your life, you not only have to go through all those unpleasant stages of grief, you’ve also got to find someone else to fill that role.

And that’s exactly the way I’m feeling about the Los Angeles Times this week after reading two separate articles in the space of four days claiming that solar panels may do more harm than good.

The misinformation they’re publishing includes an article last Sunday that was so far off base and caused so much flack they were forced to post a “For The Record” clarification on-line. Your Creative Greenius says that’s too little, too late.

Who knows what clueless or malicious agenda the skeleton crew now left at the dog trainer (as Harry Shearer has so long referred to them on Le Show) is pushing with this anti-solar panel spin job they’re foisting on us – but the bigger question is why are they ignoring the worldwide scientific consensus on the danger and sense of urgency we face with CO2 levels at 384 ppm and climbing? 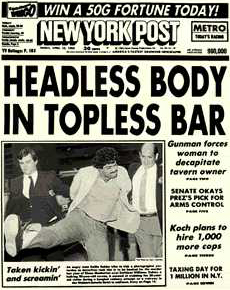 When a threat is as catastrophic and imminent as global climate change is then newspapers have the responsibility to fulfill their Paul Revere role and proclaim loud and wide that “The British are coming!  The British are coming!” and proclaim it until the message is delivered and people understand the most vital news of our time. This is part of newspapers’ core duty and their trust to inform.

But the Los Angeles Times and the rest of the corporate-owned newspapers are failing that trust – just as they are failing their readers.  And that’s the single biggest reason why the newspaper industry is now free falling as a business and why their business model is now deader then that headless body found in that topless bar.

And that’s also why the most accurate news you’ll find about Killer Coal’s role in changing the climate and poisoning our environment is in my letter to the editor published in today’s Los Angeles Times.

Rest assured if anyone at the Times wants to comment on this post I’ll give them 150 words to say whatever they have to offer on why they are downplaying the risk we face from climate change and the sense of urgency this threat calls for.

As for my lifelong love affair, I’m moving on and I’m no longer looking to newspapers to do what they never will again.  I won’t be renewing my subscriptions.

And I’m over it.  Seth Godon helped me see the light in his blog post, “When newspapers are gone, what will you miss?”  I read Seth regularly and learn a lot more from him these days than anything I read in the paper.  Seth’s right.  Newspapers are done.  Everything they offer today is better found on the web.