This Is A Generational Battle But This Time The Greatest Generation Is Still In School – Now The Climate Strikers, The Sunrise Movement & The #GreenNewDeal Are Ready To Kick Your Ass

I’ve had it with so-called “adults.” I’ve been trying to motivate them to climate action for a long decade now and I’m fed up with waiting for them to step up and do the right thing on climate. 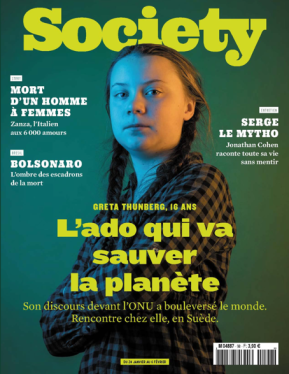 I’m sick of waiting for authority figures in government, in industry, in every position of power all acting cluelessly out of self-interest, greed and arrogant ignorance.

I’m perpetually pissed at the corporate-captured media world we live in and their massive #NEWSFAIL when it comes to informing and educating the public about the most destructive threat we’ve ever faced. I despise their acquiescence to the fossil fuel industry’s deliberate and criminal assault on our health and well-being.

I’m 61 years old and the vast majority of adults I know – outside of my colleagues in the environmental and justice movements – are still deep asleep when it come to climate reality or their responsibility to do something. And when I’ve talked to them about that, it’s obvious they’re not sweating things. 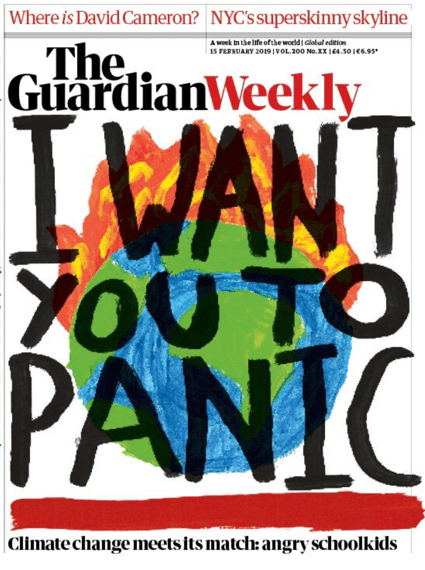 So be it. I’m through working with people over 30. You guys are on your own from here.

Most folks have heard of the Green New Deal – even if they don’t really grok the nature of a non-bonding resolution and the ability and need to shape such into a binding bill.

But I’ve been amazed by the number of people I know who look at me with a blank stare when I mention Greta and the #FridaysForFuture movement that she began last fall in Sweden.

The first media notice Greta got was from the BBC in September of last year.

By the end of October she was speaking at the Declaration of Rebellion, at Parliament Square, in London. 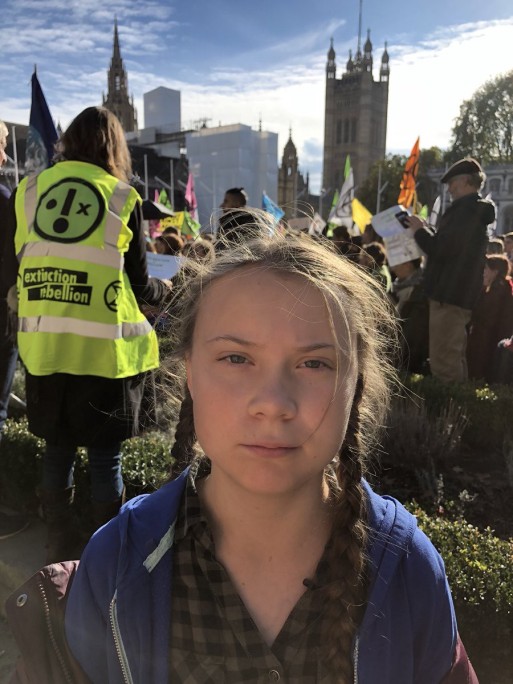 In November she gave a widely noticed and watched TED talk 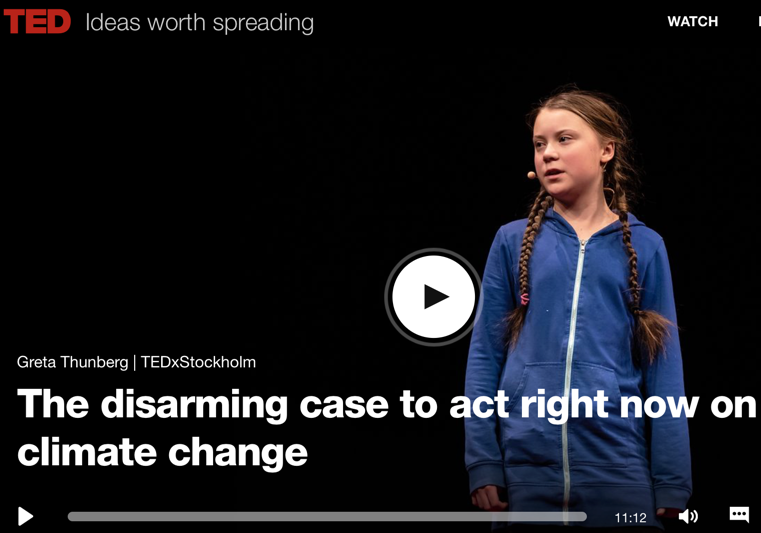 By early December Greta was at the UN Climate Talks in Poland and addressing the attendees. She captured the attention of people world wide: 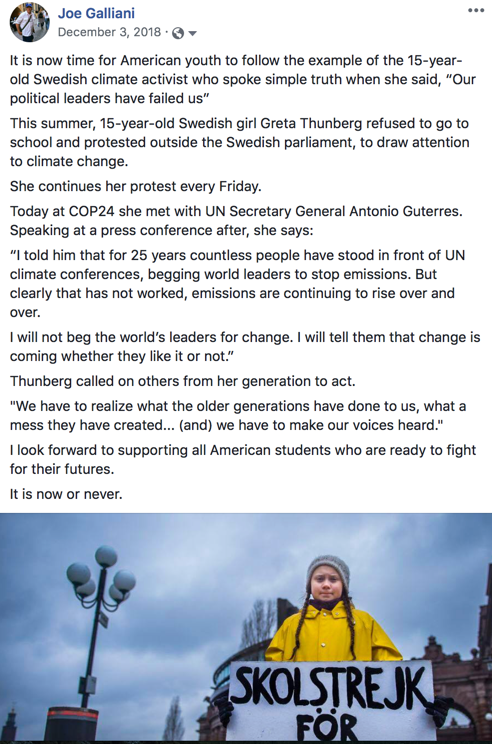 Two weeks later she was addressing the much bigger main audience –

That attention was the catalyst for climate strikes first across Europe and then spreading to Africa and the other continents.

When I tell them people that this movement has been growing, week after week internationally and now starting across the United States they scoff and say they’ve seen that before.

They’ve never seen anything like what’s happening or what’s coming.

They are not yet woke.

I have one well known activist, who had never heard of Greta, or what she was inspiring in school kids across the planet with school kids, dismiss the whole thing, knowingly telling me, “Yes, passion burns bright with the young, and just as quickly flames out as they move on to the next new thing in a few weeks.”

I understand. She’s just wrong. And like so many of her contemporaries, she doesn’t see this coming. She has no idea how angry these kids are. Or how responsible they hold her for their righteous rage.

So many adults, caught up in their business-as-usual, really can’t see what’s coming – either with the climate emergency we are in, or with the kids response to it.

But I can. And it looks fucking revolutionary to me. And I embrace that revolution. 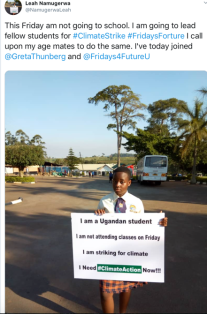 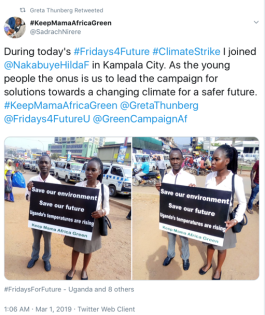 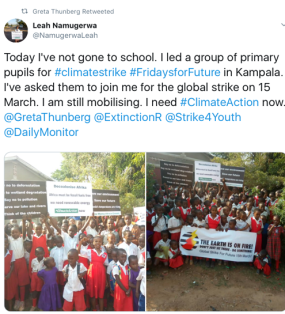 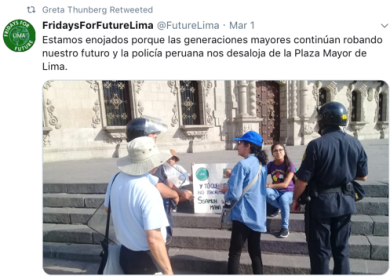 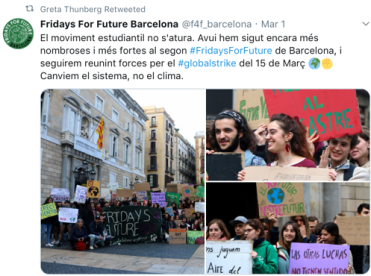 I love what Greta did in Davos.

But make no mistake – the kids are coming for those who still think business as usual will cut it. And Greta is leading that charge.

And then came Davos. 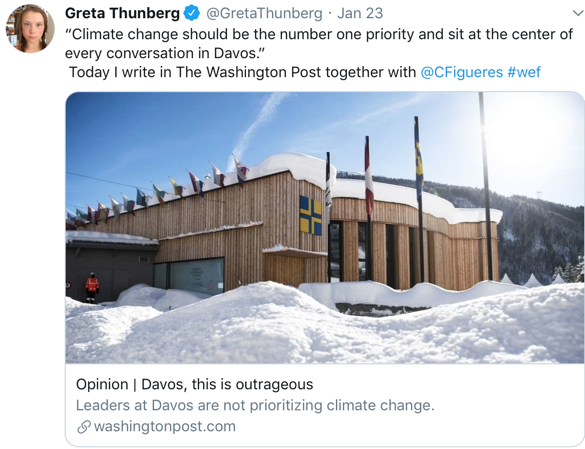 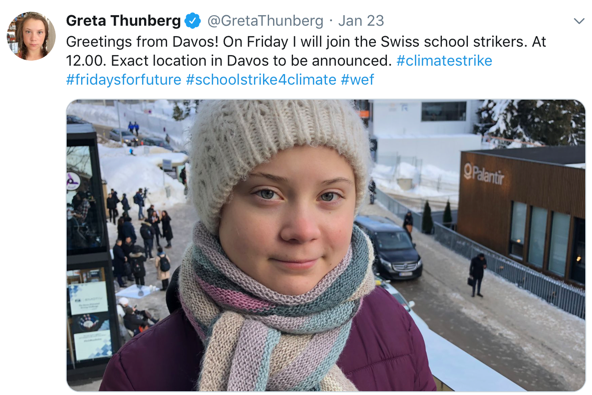 By the end of February and into March, Greta and #FridaysForFuture got even bigger 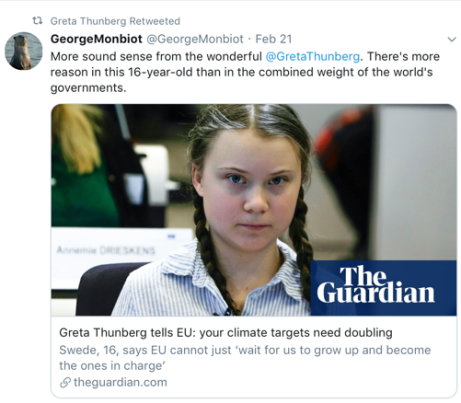 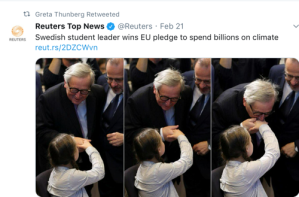 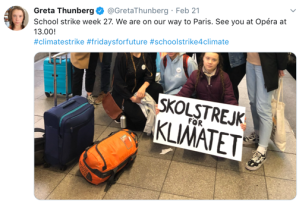 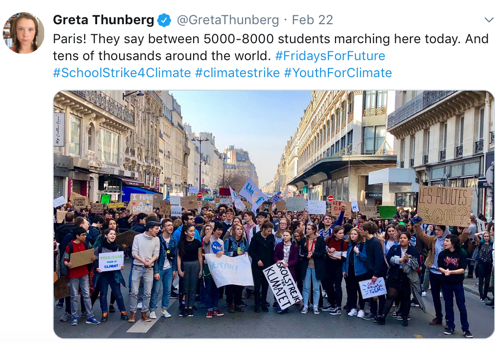 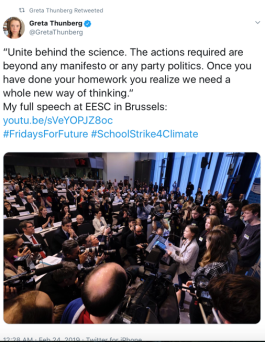 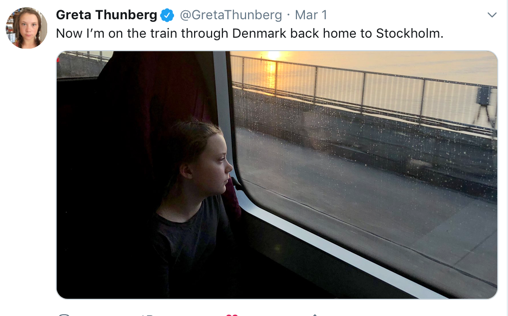 Now Greta and her cohorts around the world have big plans for a global #ClimateStrike on March 15 and I have no doubt they will exceed expectations. 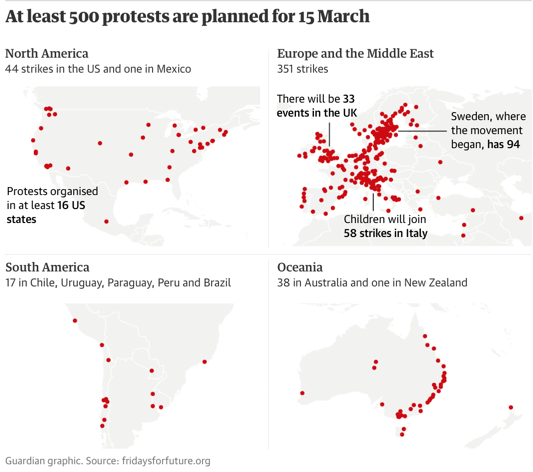 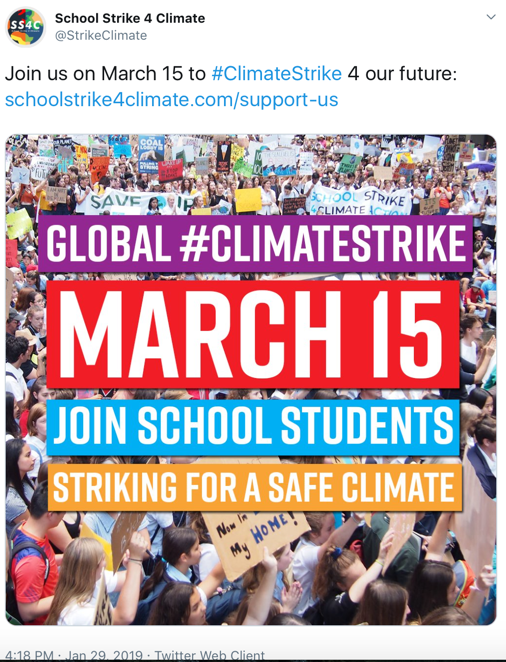 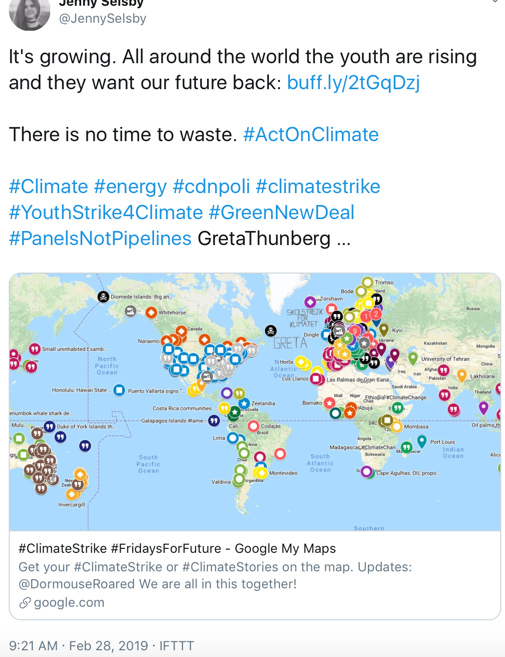 They will also take no prisoners as they make apparent in their letter:

We finally need to treat the climate crisis as a crisis. It is the biggest threat in human history and we will not accept the world’s decision-makers’ inaction that threatens our entire civilisation. We will not accept a life in fear and devastation. We have the right to live our dreams and hopes. Climate change is already happening. People did die, are dying and will die because of it, but we can and will stop this madness.

We, the young, have started to move. We are going to change the fate of humanity, whether you like it or not. United we will rise until we see climate justice. We demand the world’s decision-makers take responsibility and solve this crisis.

You have failed us in the past. If you continue failing us in the future, we, the young people, will make change happen by ourselves. The youth of this world has started to move and we will not rest again. 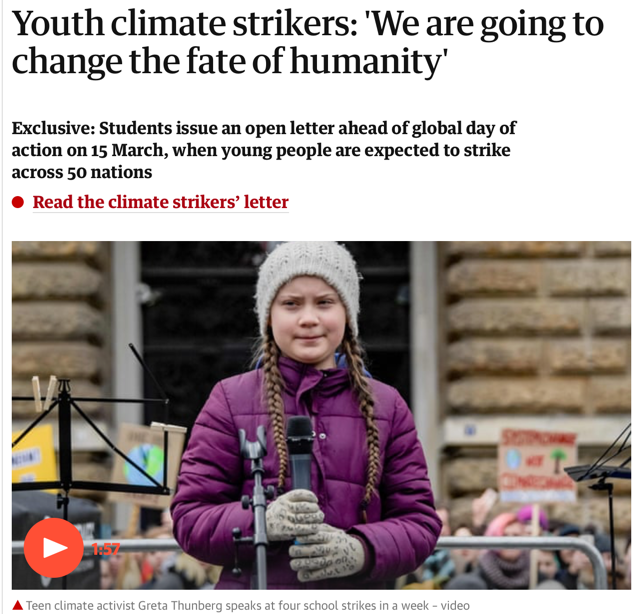 Like hundreds of thousands of young people in every country that hear her call, I’m inspired and excited about Greta rallying the students of the world to action. Wise adults will join the students and support their efforts. 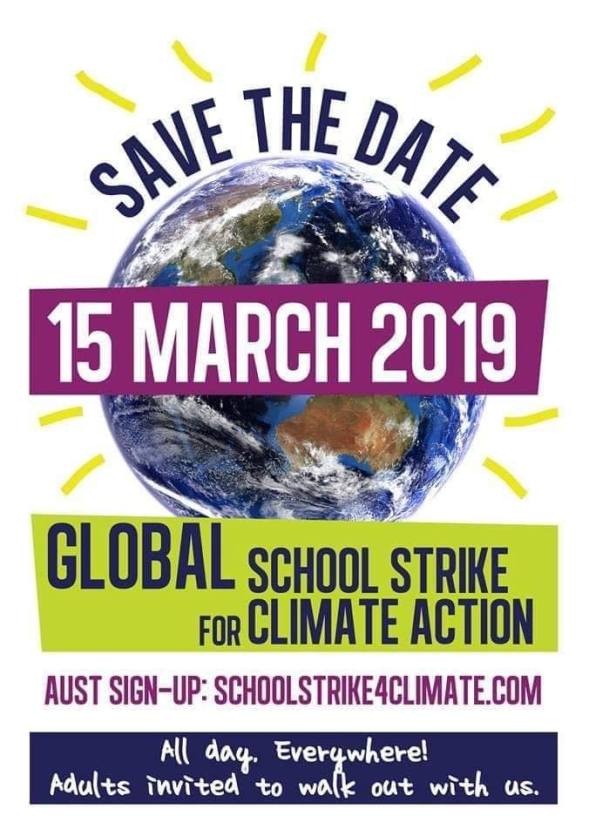 You underestimate the power of our youth at your own peril. I am convinced that a #climatestrike movement led by the young can bring this country and others to their knees.

These strikes have the potential to evolve into general strikes demanding the action that the #GreenNewDeal promises.

For many their first clue will be in just about a week. If they don’t know who Greta is today, they’re going to find out in just a few days. 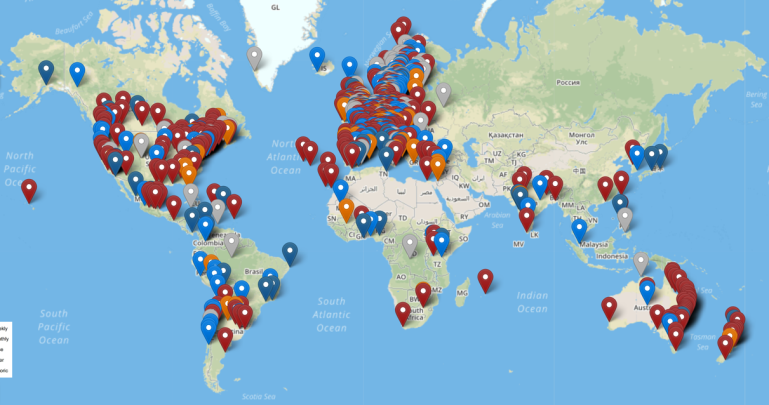 A lot of people would be giddy with excitement at being in Rolling Stone at age 16, but that’s not what Greta’s about 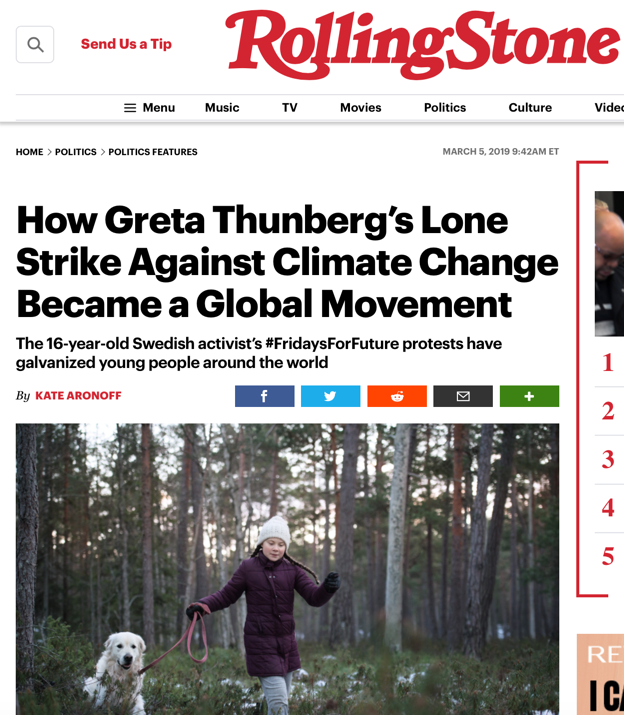 This is a young woman who will not be deterred.  And now you’ve been warned.

One thought on “To Hell With The Grownups. I’m Now With Greta & #FridaysForFuture”