What a unique concept.  First admit what a failure you were in your own personal efforts of launching a Community Choice power program where you live.  Then ignore or lie about the progress made by so many outside your community.  And finally, try to kill the Community Choice power program for anyone else with the skills and abilities to do what you are not capable of.

That’s been the strategy of SCE’s man-on-the inside of the California State Assembly, Steven Bradford, who says he “resents the implications” that he is carrying water for his former employers and current campaign contributors.

Mock outrage by bamboozlers and scoundrels upon getting called out for their attempts at the old Okey-Doke is a classic loser technique.  Good old Foghorn Leghorn in the classic cartoons couldn’t have sounded any less convincing. Especially after being puppet mastered all hearing long by the dirty energy lobbyist who whispered in his ear to feed him talking points.

It was a sad display of how laws get made in Sacramento and a cynical confirmation of all your worst fears about corrupt, dishonest, egocentric politicians who mean us more harm than good.

Fortunately the people also had a chance to speak:

And it seemed like Bradford may have heard us, since he referenced my comments – and he seemed a little testy about it:

To quote Assemblyman Bradford, “Let me go on record, I’m a strong supporter of CCAs.”  I’m glad he put that on the record, since there is no actual record of Bradford’s CCA support making any difference or being made public.  But you can read his Op Ed piece yesterday to see how he spins like a whirling dervish and how a strong supporter tries to Brutus his Caesar.

And you can read the letters of opposition and the list of people opposing his bill to see how full of shit he is.  I could sugar coat it and talk about a “difference of opinion” but this is a plain case of trying to bullshit the people you represent and stiff arm citizen volunteers in the South Bay who want something better than SCE and we are going to call it what it is.

Senator Lois Wolk had some great comments for Bradford.  She wasn’t fooled one bit by his fatuous comments:

But he wasn’t getting the love from Padilla he was expecting:

Note in this next clip how Bradford diminishes his loss on AB 2145 and the importance of his bill – and then listen to him ramble on about how much he loves and champions CCAs while he simultaneously distrusts those that exist and claims they lie and cheat.  Bradford’s right there with the old Vietnam strategy of destroying the village in order to save it.

I was born in New York and lived there when the late, great Shirley Chisholm was in office and became one of the first women to run for President.  My whole family greatly admired Chisholm and my mother was a big supporter.  So to hear someone so far afield from Chisholms courage and independence and above all intellectual honesty try to associate his own lame, disingenuous actions with her was blasphemy.

And to hear Bradford crow at the end of his comments that he has greater environmental accomplishments than most people in the entire building was laughably contemptible.  He was within 10 feet of AB32’s author, the historic Global Warming Solutions Act, Fran Pavely.  Say what you will about Pavely and fracking – and there’s plenty to say – Bradford isn’t even in the same universe, let alone the same building when it comes to any legacy on environmental issues.

Bradford admits that when he was the big dog on CCAs here in the South Bay he got nowhere and couldn’t even get 20 people together to make it happen.  Too bad he missed our MB2025 forum in Manhattan Beach to see the 150 people who filled the Joslyn Center for the very first meeting we had featuring Sonoma Clean Power’s program.  And he must have had other plans when 500 people from around the South Bay showed up on the Manhattan Beach pier to show their support for clean energy. 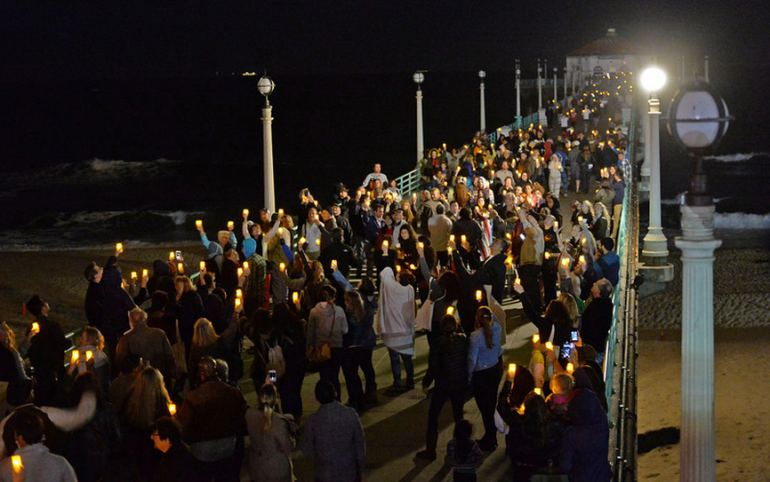 One thought on “Bradford: Twelve Years A Failure – His Reason To Kill CCAs”