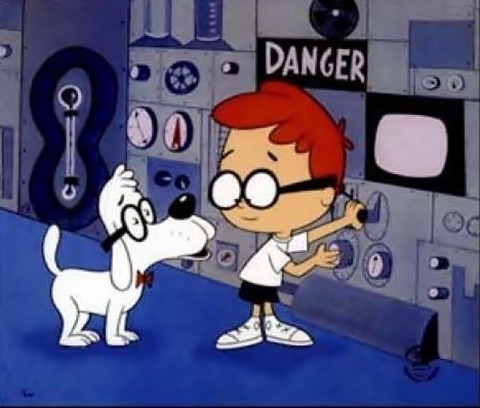 I took an unexpected trip in the WABAC Machine last week while I was on vacation with the lovely and talented Debra just outside Sequoia/Kings Canyon National Park here in America’s most beautiful state, California.

We like to rent a house in the town of Three Rivers when we go up there and we’ve always found different, very cool places to stay on Vacation Rental By Owner (vrbo.com). The house we stayed in this trip was perfect. It was a craftsman-built one-bedroom with every amenity. Private. Quiet. On 13 acres and just a 15 minute drive from the Park’s southern entrance.

There was a nice selection of books, especially guides to the flora and fauna of the High Sierras. We also found magazines (Utne Reader anyone?) CDs and Blueray DVD movies and documentaries. 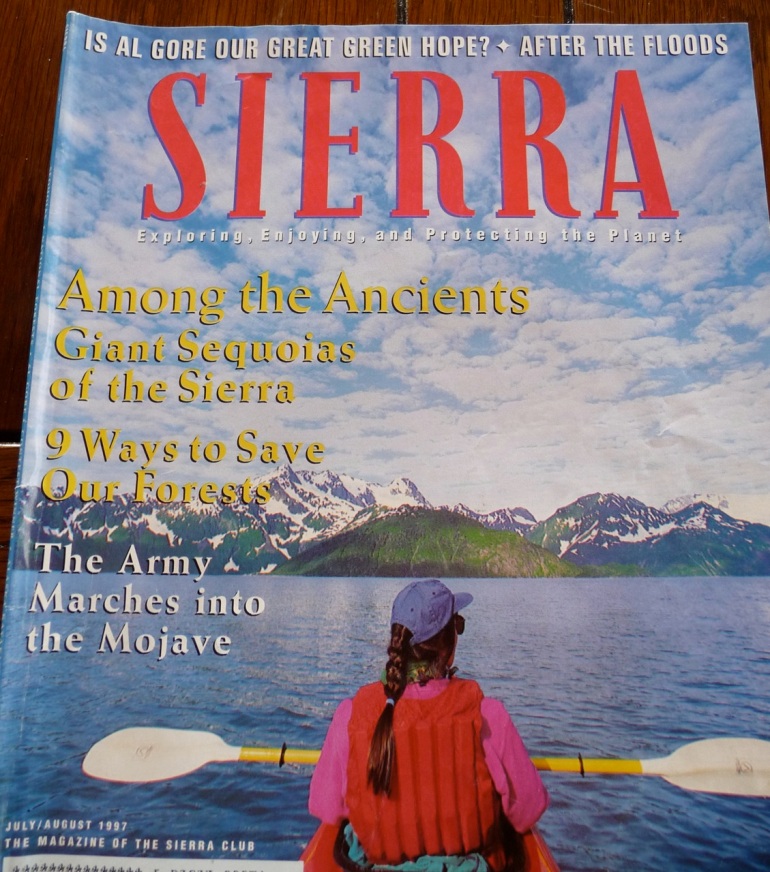 I pulled an old issue of Sierra (the magazine of the Sierra Club) from July/August 1997. It was there because the cover story was “Among the Ancients, Giant Sequoias of the Sierra” Another article headline that made the cover, “Is Al Gore Our Great Green Hope?”

Wow… 14 years ago doesn’t seem like a million years ago, but damn if it wasn’t.

Vice President, Al Gore, talking about the need to take immediate action on global warming and failing to convince the President or any Republicans that he knew what the hell he was talking about.

Indeed as it turned out he knew far more than the President or any member of Congress did on the subject but none of them cared because Gore’s personality and persona didn’t work on TV.  I’ve always said that it’s a curse to be truly intelligent in the USA and nobody in American politics ever fails when they attack the smartest person in the room for having too damn much intelligence and not enough common man “I want to have a beer with that dude” appeal.

Al Gore is one reason I like to believe in my own favorite version of the String Theory of particle physics – multiple alternative universes occurring simultaneously is the way I like to grok it.

In one of those alternative realities Al Gore got elected President in 2000 and because he understood what was happening with CO2 and other greenhouse gas emissions he made cutting emissions, and developing renewable and clean energy sources our country’s focus and goals.

The USA got the leap on everyone else with solar, wind and other fossil free energy as well as electric cars and other alternative fuel vehicles. Light rail and high speed rail boomed in the 8 Gore years and the American economy soared in the new clean energy renaissance.

Unfortunately for me and Deb, we’re living in the alternative universe where the dirty energy mafia runs things, the one where they stole the election from Al Gore and made a former oil company man the President. He then made sure there would be no clean energy renaissance because he’d spend more money than ever imaginable on imaginary wars in the Middle East while allowing his fat cat backers on Wall Street – the brokers, bankers and hedge fund masterminds to take this country to the brink of bankruptcy while they personally made out like bandits.

In this alternative reality we’re in, the crashing and burning of the economy, just when the world was deciding whether to take bold and decisive action on global warming, was a deliberate arson job designed to make sure financial survival trumped making any bold moves like carbon taxes and rapid transitions from oil, coal and gas.

In the dimensional string we live in cartoon characters hold all the seats in both the House and Senate and their legislative actions are decidedly more Itchy and Scratchy than the Simpsons or even Futurama. They preside over the demise of our civilization with the arrogant ignorance of a Donald Trump in his very own make believe TV studio boardroom.

Speaking of the King of TV Comedy, there can be no satire funnier than the reality of other Republican Presidential candidates looking down their noses at The Donald as a legit contender to the throne – as if they were in a different, more exalted class or higher rung on the evolutionary ladder. That dog just won’t hunt in 2011 when all politics is a reality show – and not one that requires any talent or skill other than being the last schmuck standing after everyone else has been fired and given their post-credits taxicab confessional moment to explain why they don’t really suck.

That’s the perfect analogy for our future here in this alternative reality where we’re playing out the “Do Nothing About Global Warming” scenario until it’s far too late and we then witness the hell and high waters that come with CO2 levels above 45o ppm and global temperature increases above 3 degrees. It’s what the cartoon characters who run our dimension call “a hoax.”

Just like helping to “Preserve, Protect and Promote the National Parks” which has been our mission at The Parks Company since we launched the company in July of 1997.

And right there on page 53 of that very same issue of Sierra Magazine I was time traveling through at our Sequoia View Cottage was the very first ad The Parks Company ever ran for our custom designed, original Yellowstone National Park hat.

My best friend, Mike Baggetta, and I started the Parks Company after learning what lousy shape the National Parks were in with billions in deferred upkeep, repairs and regular maintenance because no President or Congress is willing to adequately fund the Parks no matter what the shape of the economy at the time.

If it were up to me, all Presidents and all members of Congress would be banned from the National Parks unless they want to go to anonymously volunteer their time on a parks improvement project. And I’m not talking some phony photo op crap for 30 minutes while the cameras roll. I’m talking about a week or more of tiring physical labor or don’t bother coming.

In 1997 I was naive enough to believe Mike and I could make a difference and to think that if enough Americans found out about the condition the parks were in they’d want to help too. We traveled to Parks all over the country to see for ourselves, to talk to National Park Rangers and Superintendents and the folks who run the nonprofit support groups.

We also made regular trips to Washington DC to lobby for support for the National Parks at the House, Senate, and NGO levels and we learned that we could meet with anyone we gave money to. The more money we gave the longer the meeting was and better the food got. But nothing we did could gain the parks any more love or funding. 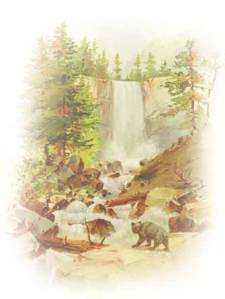 We could convince Mattel and 20th Century Fox and other successful companies to get on board but politicians knew that the Interior Department and its NPS had no juice come budget season and there were no big political payoffs to come from being the champion of the National Parks. Too few people give a shit about that title.

That was back in 1997-2000 and if I thought things were bad for the parks and people were apathy-maxed out then, all I had to do was wait till 2011 to see how much less Americans could care about the environment, let alone their parks – be they state parks or national.

When the mantra is “Cut government spending and cut taxes too!” then nobody is too worried about what shape the parks – or any other landscape – are in when we pass them onto the next generation – especially not when their belief system has them bizarrely focused on what size national deficit the next generation will inherit.  As if the deficits of any other era in our lifetimes have ever made a rat’s ass worth of difference.

In an economic system as rigged and gamed as ours, the deficit in national parks maintenance, repair and upkeep is monumentally more important than the crooked numbers game racket that is the U.S. deficit. Except not here in this alternative dimension.

And believe me, I know about deficits.  The Parks Company hasn’t made a profit in the 14 years we’ve been in business and most people don’t even know that we exist. But we’ve made people happy with our products and we’ve helped further our “Every Sale Supports the Parks” promise with the small scale grants we’ve made at National Parks around the country. The way we did it was through financial sacrifice -which as you may know is no longer voluntary.

It gave me real joy to see the results of one of those grants while at Sequoia National Park outside the Foothill Visitor Center where we helped pay for plant identification plaques that still look good today… Even if some them have the incorrect plant names on them.

It’s tiny, incremental, insignificant improvements like those plant I.D. markers that are all we have left now here in this dimension of the silly string mulitverse.

Getting some new bike lanes installed on local city streets, getting plastic bags and water bottles replaced with more sustainable options, putting some solar panels on a few buildings now and then, starting a community garden, doing a beach clean-up a few times a year and going to lots of meetings.  You know, feel-good, positive stuff that’s way too late in the game to make any difference at all, but stuff that will help occupy our time while we hurtle at accelerating speed towards the climate catastrophe that surly is our fate to suffer – and so much sooner than we think… if in fact we are still thinking at all.

The script has already been written and all that’s left for us to do is act it out until the credits roll.

One thought on “Traveling Through Time, Exploring the String Theory and Hugging the Giant Sequoias”