As with most things, if you want to green the media you’ve got to get your hands dirty.  You can’t just read something and get upset, you need to reach out and get someone else upset – and by upset I don’t mean “angry.” I mean as in “upsetting the apple cart” by overturning it.

Today it’s just too quick and easy to reach out and respond to the person who wrote the story, the person who edited the story and the outlet that put the story out to the public.  In a content consuming world content is king for a day.  And in the 2.0 world we live in, WE supply the content that keeps stories alive and reframes them.

Newspapers are a great example because they are a dying legacy media who cannot afford to lose more subscribers or readers than they already have.  Even better, a higher percentage of the people we want to reach read the newspaper.  People in positions of power, influence and financing still read newspapers

Recognize an opportunity to reinforce good coverage and to seize the media platform when the coverage is bad.  And by “good” I mean, fair, honest and accurate.  By bad I mean, biased, off-base, incorrect and misleading.

If you’ve been watching for the past eight years – and longer – you’ve seen the evolution of the news cycle and conventional wisdom into the pack mentality the media operates under today.  The truth is that the media loves the green issue, sees it as having long, popular legs with users and thinks it can sell lots of advertising around it.  And they’re right.  More and more newspaper print ads take a green sales angle

It’s not because the media’s heart or even intellect is in the right place, it’s because they’ve lined up behind the conventional wisdom and the polling data.

What that means is that the media is scared of being on the wrong side on green issues and they’re scared of pissing off the green community.  And they should be.  That gives us leverage and we need to use that leverage, flex the power that comes with that leverage  and use the media the same way the conservative right and the Bush war supporters used the media before they were found out to be wrong and the polling turned against them.

We in the green community don’t have that handicap because we are not wrong and the polling will only continue to move in our direction.

So when we read a really crappy article about an important green story like the piece Alan Zarembo wrote on the Alternative Energy & Transportation show in the October 21 issue of the L.A. Times, we don’t have to just get steamed because of the bad reporting and mediocre writing – and we don’t have to accept it.  We just need to use the reporter’s email address at the end of each story and take them to task.  Here’s an example:

I am writing to tell you how disappointed I was in your article covering the Alternative Energy and Transportation Expo. I was hoping to learn something about the different alternative energy options available and about the progress different manufacturers have made in non-gasoline powered engines. But instead, what you offered was 18 paragraphs focused on the Melnik family, a single paragraph about the actual event, and one additional paragraph that showcased your own uninformed, cliche-ridden bias: “The expo, in a hangar and adjacent parking lot, attracted plenty of bicycle advocates, vegans and people worried about their carbon footprints.”  Instead of offering an iota of honest insight into an event that I wanted to learn about, you wasted half a page with the condescending story of a woman who comes across as a clueless moron. A woman who finds plug-in/electric vehicles “a problem for me.” Any research into public opinion about Americans’ desire for alternative energy vehicles would have taught you how UNrepresentative your subject focus was and how off base your snarky coverage of this event was.

I’m very sorry you were assigned to this important story to Southern Californians which you trivialized in a juvenile manner. Your focus on the Melnik family was the lazy, thought-free approach to this story and your slacking on this job is painfully obvious.  Thankfully a simple blog search yielded multiple pieces superior to yours in every way. Too bad the newspaper I pay for offered me so little news value by comparison.  But I did learn one valuable thing from your article. In the future I’ll save myself the nonproductive time and aggravation when I see the Alan Zarembo by-line and I’ll just skip the piece knowing in advance what you have to say about the subject.

Now I’ll be the first to admit that I was direct and harsh, and that’s exactly what Zarembo’s piece deserved.  However, I didn’t get personal or engage in name calling I just told it like it is.  And of course I used my real name, which surprising is rare among the rants reporters receive.

I wasn’t surprised when Zarembo emailed his reply a few hours later:

You’re right–we should do a comprehensive story on this issue. But unfortunately this was not the chance. I was handed this assignment at noon on Saturday, and the best I could do in that time–the debate on this issue in a single family. Unfortunately, this is just the way things work sometimes. The story was not my preference, and if you do read more of my articles, you will see that many are painstakingly researchered over many weeks. Sincerely, Alan

Frankly, I found this to be a weak rationale and what he really did was confirm my opinion that he had done a lazy job.  But having established contact with Zarembo and wanting to be able to communicate with him in the future, here’s how I responded:

You’re right – you have done some excellent, painstaking work on much bigger stories than this. I appreciate your thoughtful reply. I still don’t buy the angle you chose, but at least now I can chalk it up to a rush job rather than lazy work. Thanks for responding to my harsh email.  Regards, Joe

And I didn’t stop with the reporter, because that’s not where the real power rests at a newspaper, so I wrote a letter to the editor as well.  I wasn’t surprised when they printed it a few days later. 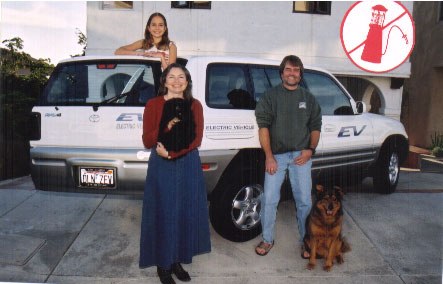 But I was surprised to see the other letter on the subject and delighted with how powerful it was, coming as it did from Moira Nelson, someone who together with her husband Dency are well known in the green community for their family’s commitment to walking the green walk and having done so for a long, long time now.

And I’ve been equally stoked at the reaction I got from others with similar viewpoints, some of whom are now reading this post.  Can you feel the strength and energy growing exponentially?  I can.  And the more we connect and work together, the more our power and influence will continue to build.  But it requires us to recognize the opportunity and seize the moments that are ours for the taking.  Like with the media.

I wasn’t kidding when I said that I learned a lot more from the blog community and even from the local Santa Monica newspaper about the Alternative Energy & Transportation Expo than I did from the L.A. Times.  This all started because I’m thinking about my next car and trying to decide whether to go plug-in or all electric.  I’ve only got 40,000 miles on my 1997 Honda del Sol car, and I could easily have it another 10 years, but I’d rather go greener.

Check out the Expo coverage on:

The Santa Monica Daily Press also did a better job than the L.A. Times did.

As always, I’m interested in reading what YOU think.  Email me at mrjoe@mrjoe.com