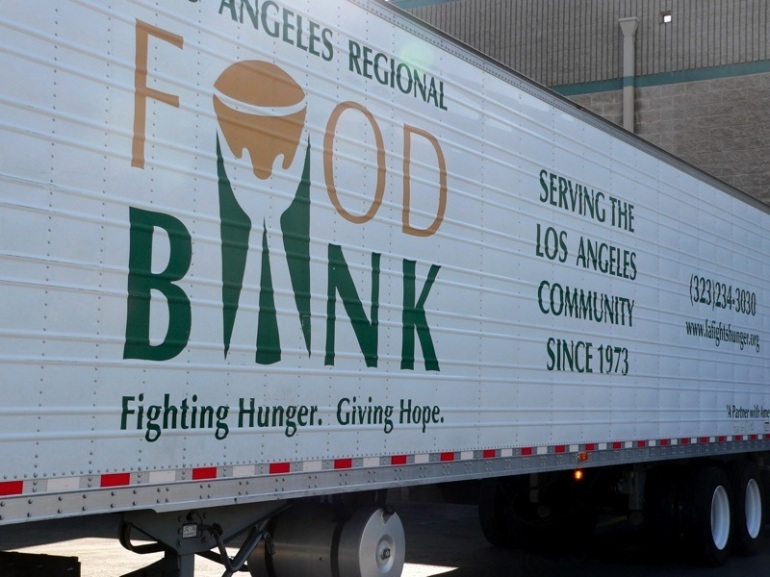 When it comes to promoting sustainable lifestyles from a green standpoint, energy use, recycling, reuse of consumables and cutting the wasteful aspects of our lives are the obvious go-to issues.

But to me, sustainability is even more basic than that.  You can’t live a sustainable life if you don’t have enough to eat.  Hell, you cannot even sustain life if you’re malnourished and hungry all day.

So feeding the hungry is a green issue for me and like all green issues it’s really a moral issue and another character test for all of us about what kind of person we want looking back in our mirrors.

One of the ways I wanted to celebrate my 50th birthday was by making a significant contribution to mark the occasion, rather than being gifted with more “stuff.”  At this point in life the wise folks know that living is better when it’s simpler.  Getting rid of lots of accumulated “stuff” not only frees up more space, it frees the mind as well – but that’s another story.

In July I read a piece in the New York Times about a growing trend at the birthday partiesof upscale New Jersey kids from 4-16 years of age.  They already owned every toy and electronic plaything they ever desired and their parents didn’t want them collecting another 44 gifts they’d never use.  So some moms and dads were having their kids pick a beneficiary – like the local fire house or a charity – to raise money or donated items for.

Even though Miss Manners didn’t dig the idea, I loved it!  I knew as soon as I read the piece what I wanted to do for my birthday dinner.  I would ask my friends to bring a donation for the L.A. Regional Food Bank instead of a gift for me.  I would feed my friends at a birthday meal and then they could help feed people a lot less fortunate than the lot of us.

It worked like a charm and thanks to the generosity of my pals and a few bucks of my own, I raised $1,000 for the Food Bank.  And as an added bonus, my friend Kim, told me she knew the President of the organization, Michael Flood, and she would put me in touch with him.

And that’s why I found myself in downtown Los Angeles today and not in one of the neighborhoods where they’re building any new destination location Nokia Theaters or luxury high rises.

This is a neighborhood that is another galaxy away from the upscale fantasy world I get to live and work in.

But my life wasn’t always so cushy and carefree and I still remember standing in line to get free cheese and butter from the government during the Reagan years before my talents had been discovered on a nationwide basis.  So I didn’t feel too out of place taking the Slauson exit off the Harbor Freeway and heading through the hood to 41st Street where the Food Bank warehouse and offices are.

It’s an impressive operation and I was lucky enough to spend a little time with Michael Flood and get a tour of the facility.

Michael has been President/CEO at the L.A. Regional Food Bank since 2000 and has been working in the food bank field for 17 years now.  He confided that despite the broad support the Food Bank receives, his job and their mission gets harder every year.  The numbers of hungry people who rely on their food just continues to grow and so too do expenses like power and cooling for the freezers and refrigerated storage they have.

But I found Michael anything but dispirited.  His strong positive attitude and experienced perspective projected the air of a man on a mission who knows what a difference the Food Bank’s work makes and who intends to keep pace with the growing ranks of the hungry in Los Angeles.

Michael told me that the $1,000 we donated would translate into 5,000 meals for hungry people who needed them.  That made me feel proud – even though I know it’s a tiny difference, it IS a difference.  I can’t imagine ever having another birthday party and not using it to raise money for the Food Bank.  I hope some of you who read this are inspired to do likewise.

I found my visit more encouraging than I imagined because of how much good news I got about our community.  So many different businesses and companies donate food and so many different people from all over L.A. volunteer.  People DO care.

The Food Bank relies on volunteers and they could use more as they serve more and more people from Long Beach to Lancaster.  The ranks of the hungry continue to grow…

To learn more about becoming a Foodbank volunteer, contact Ana Martinez, their volunteer coordinator at (323) 234-3030, extension 144 or amartinez@lafoodbank.org.

Thanks to Michael Flood for being so generous with his time and for the years of dedicated work he’s done for the Food Bank.  When it comes to walking the walk with their lives, Mr. Flood has covered far more miles than most of us and made a lasting difference in the lives of tens of thousands of people. 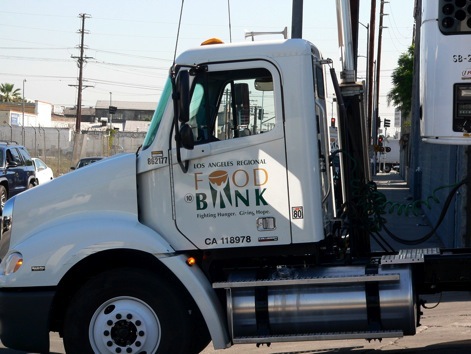 ’m looking forward to working with the L.A. Regional Food Bank as a volunteer going forward to help them get the word out about the essential and inspiring work they do.