END_OF_DOCUMENT_TOKEN_TO_BE_REPLACED

My politically connected friends (who prefer to remain nameless) advise me to accept State Senator Ted Lieu as he is and be happy for his strong environmental record.

They tell me to stop wishing he was somebody else and that I’m dreaming if I think he’s ever going to change into the dynamo that I fantasize about. 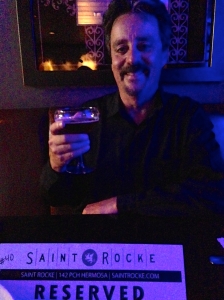 Yet still… I couldn’t stop thinking about it Wednesday night at St. Rocke’s in Hermosa Beach where I had gone to get away from it all and rock out to Jimmy Vaughan and his band.  Luckily that totally did the trick as I downed one quadruple The Reverend after another, locking into the groove.

That night I slept like Rip Van Winkle himself, dead to the world and dreaming the vivid-as-life dreams that The Reverend, and the music, and the moment made possible.

And it all suddenly became clear to me.

Suddenly we were at The Crossroads as Ted Lieu runs for Henry Waxman’s seat in the United States Congress.   Waxman has been our heroic climate champion for many years now and is retiring.  New, fresh, young, energetic blood is needed from a new champion at this special spot on the climate timeline – and Ted Lieu has now seized his moment and become that champion.

Everything he’s done in life has led to this unique time and place. And I could see Ted, bigger than life, looking strong, and determined and unstoppable.  He was downright dynamic.

And the issue that Ted grabbed and commanded and was using to transform himself into a climate legend was Community Choice Aggregation.   It was a natural for Ted and he knew it.

And right before my eyes Ted was making it his own and becoming positively evangelical about it.