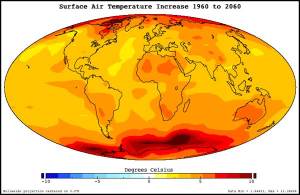 The latest news on global warming could not be worse.  Climate scientists now agree that we won’t be able to restrict warming to just 2 degrees – which would have been bad enough.  Those in the know, including NOAA say there is no doubt that the world’s extreme weather is being caused by climate change.  And last week’s The Planet Under Pressure conference, made up of planet’s top scientific experts on the climate issued an urgent plea for action as we reach the tipping points for runaway global warming from which there will be no reversal or respite.

“Civilization is at risk,” they warned.

But no one is listening.  You don’t read these stories in your newspaper or on mainstream news sites or see them on your TV news.  The fossil fuel industry floods the airwaves and Internet with lethal lies and propaganda in a nonstop assault on reason and intelligence.  News of the Mega Millons lottery jackpot and the gunning down of individuals in American cities trumps the most important story of the last 100 years.  Distracted by the bread and circuses of our time and doomed by our own lizard brains half of the United States population believes that global warming is a hoax designed to make scientists wealthy.  Every Republican running for President of this country agrees with that ruse and vows to eliminate the Environmental Protection Agency.  Nothing I do can change any of that.

Faced with this bizzaro world reality I have opted out of futile protests and demonstrations and chosen to do the only thing I can do – increase the amount of renewable energy, energy efficiency, tree plantings and sustainability practices in the most effective way I can.  Which is why I now work for EcoMedia, who is responsible for doing all of those things, and more.

Last week EcoMedia announced new partnerships with five more nonprofits to accelerate our ability to fund environmental projects all across the country.

and Enterprise Community Partners are now working with EcoMedia to help identify environmental projects that need the funding our company secures from CBS advertisers who agree to run their advertising as EcoAds.

That funding is putting solar PV on high schools.

Since 2007 I have tried to educate, to get the word out, to rally others to acti0n, to sound the warning klaxon – all to no avail.  Now I spend my time working with nonprofits, school districts, cities and counties helping to find projects like the above that can be funded and working with corporate advertisers who want to financially support such efforts.  Every day our EcoMedia projects cut carbon emissions, cut energy use, help educate and improve the environment.  It’s the best way I know to actually make a difference and I’ll tell you right now you ain’t seen nothing yet.

EcoMedia is gaining more momentum and effecting more change with each new project we help fund and we’re only going to grow bigger, faster and stronger.  We’re a small but mighty band of super committed social change activists and top professionals and led by our President and Founder, Paul Polizzotto, we are dedicated to doing nothing short of altering the course of history.